M. and R. P. from Kiryat Gat know each other for over thirty years, but they are married four years. R. (76) has become a wife and a friend for widowed M. This fact does not hinder the Ministry of Interior to suspect that their marriage is fictitious.

M. has forgotten the life with two legs. He lost one leg in the II World War, seventy years ago. Despite his disability, he received the education in engineering. He became the head of a department at a factory in his hometown in Ukraine. He was an honored citizen.

R. worked as a bookkeeper at the same factory. She was not only a colleague for M., they were also neighbors – their gardens were next to each other.

“Like relatives, we were so used to each other.  When M. and his wife left for Israel we continued to call each other regularly. Six years later M.’s wife passed away and M. was left alone.”

M. lives in Kiriyat Gat, he is the Second World War invalid. He was wounded four times and he got a concussion two times. He has a sugar diabetes and suffers from high blood pressure. Some years ago he became blind in one eye and his hearing has worsened dramatically.

Elderly couple wants to get married

“ I lived with my dear wife for sixty years,” tells M. “But when she passed away, I realized that I am like a lone wolf. It was physically difficult and emotionally unbearable. I called our old friend R. and she listened to my complaints. Since she also was alone, she understood me well. I invited her to Israel. When she arrived, we both realized that this is our destiny. Nevertheless, we decided not to be united immediately. R., being a law-abiding person left Israel after three months. I was longing after her very much and after half a year invited her back. In 2012 we went for the first time to the MOI to prolong R.’s visa.” 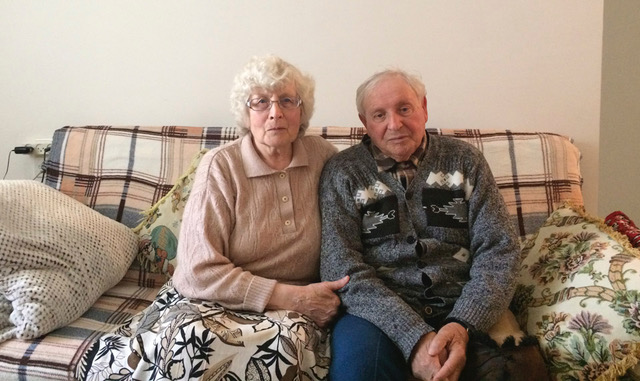 As soon as the clerks in the MOI heard that the elderly couple wants to get married, R. received a deportation order to leave the country within two weeks.

“I have never broken any law. I cried, packed my bags and left,” tells R. “M. was so much looking after me, he himself came to me. While we lived in Ukraine, we registered our marriage in 2013. We lived as husband and wife. Once when I became ill, M. took care for me with such compassion.”

According to M., he asked MOI several times to allow his wife to come to Israel, but he could not get even an appointment. “We have gone through all kind of things – once they deported me straight from Ben Gurion airport,” tells R.

Half a year ago she returned to Israel with a tourist visa. Global Aliyah heard about the struggles of the seventy-six-year-old wife and ninety-three-year old husband. Global Aliyah realized that the elderly couple couldn’t achieve the change of status for R. With the help of the lawyers’ they could gather all the necessary documents.

“Finally we had an appointment in the MOI. As if it is not enough that we are married for four years and visit each other, they interrogated us separately about what we are eating or breakfast and lunch, what kind of movies we watch together. Their final answer was that within two months they’d invite us to the additional meeting in the Jerusalem office. And after that, within one month the MOI will decide whether to give to R. a work visa. I was shocked. I do not know if at our age we have time to wait for these three months. Why would seventy-six-year-old R. need a work visa? It does not give her elementary rights, i.e. health insurance. For a person in her age, it equals with chasing her out of the country.”

M. wipes his tears and continues: “I have been always ashamed to ask for myself benefits from the government. Why should they take away the last happiness I have in my life. Why should they chase away the honest person who has helped a Jewish family? Why illegal immigrants have right to live in this country but a disabled Jew cannot to live with his wife? I beg the officials: honor the old soldier, do not make my last days miserable.”

93-Year-Old Begs to Live with His Wife