Nataliya Krishanovski is part of a 20-person team of Christians who for years have been helping Ukrainian Jews repatriate to Israel because they believe doing so helps fulfill biblical prophecies and makes up for antisemitic persecution.
Krishanovski, who works in the Ukraine office of the Christians for Israel, said she has been driving Jewish families in the Kyiv region to rendezvous points from where other drivers take them to neighboring Moldova. She called the work meaningful on multiple levels, not least through “the look I see in the eyes of the families I bring,” she said in the interview, holding back tears. “Their eyes look like they have been delivered.” Following Russia’s invasion of Ukraine that began on February 24, the Christian Zionist organization has used connections and contingency plans they have spent years building to help hundreds of Ukrainian Jews leave the country — representing a significant portion of the thousands of Ukrainian Jews who have fled during the war so far. Read more: 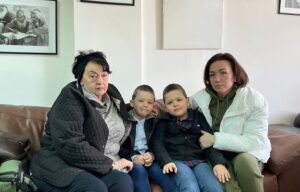 Refugees that traveled 16 days from Odessa to Israel