We have a heartbreaking case of a little 3-year-old boy, whose Jewish mother, Israeli Citizen died of AIDS in Latvia. The boy has AIDS and his Latvian father took him to Israel to apply for the Israeli citizenship, but their request was rejected.  This little boy’s condition requires constant medical assistance, but he and his father have been now in Israel for eight months without any medical insurance since they only have tourist visas. Global Aliyah has hired lawyers and is fighting for the right of this little Jewish boy to receive what legally belongs to him – the Israeli citizenship. Please help us pay the expenses for them.

Please read more about his case in the Haaretz article:

Israel is refusing to grant citizenship to a 3-year-old boy who has AIDS and is the son of a Jewish woman with Israeli citizenship who died 16 months ago, even though he is entitled to citizenship as the child of an Israeli and under the Law of Return.

The boy has been in Israel for eight months as a tourist and has no national health insurance coverage. His condition requires ongoing medical attention and his treatment at Rambam Medical Center, Haifa, is being funding by donations. 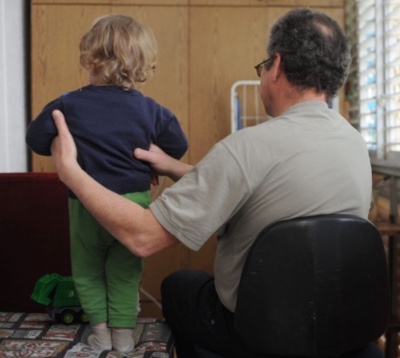 The boy and his father

His father, a Latvian citizen who is not Jewish, came with him to Israel last summer. The father immediately sought to regularize their status here, but received no response to his applications from the Population, Immigration and Border Authority, although the authority did periodically renew their tourist visas.

Two weeks ago, the authority told the father it would only agree to deal with his request if he got a family court order establishing his paternity. This is a lengthy procedure and it isn’t clear why it was considered necessary since the boy’s Latvian birth certificate has both parents listed.

The boy’s mother was widowed in Latvia four years ago, at which point she applied to immigrate to Israel, where her own mother has lived since 1996. In September 2013, she married the non-Jewish Latvian man in Riga. A few days later, she flew with her daughter from the previous marriage to Israel, where both were granted Israeli citizenship.

The Jewish Agency recommended that her new husband join them later since he had not been included in her request to make aliyah. Two months later, her husband flew to Israel but was refused entry and sent back to Latvia. As a result, the woman and her daughter flew back to Latvia, where the couple had their son in March 2014. In December 2015, the woman died of AIDS.

Last February, the widower submitted a request to immigrate to Israel with the boy, so the child could grow up near his grandmother in Israel, as his mother had wanted. The request was rejected last June, with no explanation. A month later, the father came to Israel with his son.

Lawyer Naomi Kassel of the Reform Movement’s legal aid center for immigrants, who represents the family, wrote to the Population Authority on Sunday, requesting that the boy be granted Israeli citizenship immediately. She noted that when there is a birth certificate issued soon after birth, based on hospital release documents, there is no reason to cast any doubt on the relationship between the boy and his Jewish mother. And even if there was, she added, “That doubt should recede given the mother died of AIDS and the son has the disease.” She added the Supreme Court has established that genetic testing should be a last resort in such cases, given the length of the procedure and its cost.

“There is no, nor was there ever, any reason not to give the minor Israeli citizenship immediately, without demanding additional documents, and there is certainly no reason to condition regularizing his status on the issuing of a paternity judgment,” she wrote. “The meaning of this decision is that a Jewish minor, the son of an Israeli citizen, can’t get medical care for his serious illness.”