On the brink of death

One of the Ukrainian Jewish tourist Olim, Mr. V., was on the brink of death, because of his medical condition. We met Mr. V. and his wife N. in a small apartment his 70-year-old mother rented in January. Before leaving Ukraine he was attacked in Chernigov for wearing a kippah - someone just hit his head with a heavy object and left him unconscious on the street as vegetables rolled out of his shopping bags…
They saw that their life in Ukraine became unbearable and flew to Israel on July 14 with three children aged 13, 3 and 1. Mr. V.’s mom is Jewish and has lived in Israel since 1996 and most of his relatives are here, but the Ministry of Interior didn’t change their status from a tourist to a new immigrant at their arrival. In spite of the promises made by the Ministry of Absorption on television to process the documents of people in that kind of situation fast, they had their first appointment only in September and an interview in November. Mr. V. had two criminal episodes in his past - one in 1990 (for a theft committed by somebody else) and one in 1995 for the street fighting. 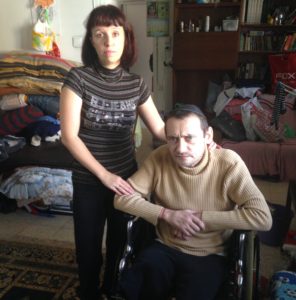 Mr. V. in a wheelchair after he lost is leg and his wife N.

In crisis without basic rights

Ukrainian law speaks of expungement of a criminal record and Ukrainian police issued him a letter that he doesn’t have a criminal record. Ministry of Interior had prior knowledge of his past through an interview with him and suspected him of forging this letter. Long story short - the Ministry of Interior has delayed changing his status for two years and they are still tourists. Mr. V. had a bad accident in 2010 after which thrombosis set in his legs.
The operation performed in Ukraine wasn’t successful leaving him in excruciating pain in his legs and in the back. Mr. V. could hardly move around at home. Because Mr. V. and his family are still tourists they have no medical insurance and they cannot work. His health became worse as he couldn’t afford bto buythe medicine he desperately needed. We helped the family several times, providing finances and food cards.
The pain became unbearable. Mr. V. could not sleep for five days because of pain that was driving him mad. His wife took him to hospital and it’s a miracle he was accepted without any insurance. His life was saved due to an emergency operation which cost $37,000. When the Beilinson Hospital learned that he is not a citizen and cannot pay, Mr. V. was turned out of the hospital in spite of the fact that he was scheduled for another operation. His medical condition deteriorated, since the hospital wasn’t giving him the full care and recently his leg was amputated above the knee. Recently Mr. V.s doctors discovered that three arteries of his heart are clogged. This was discovered ‘accidentally’ during a check before operation. He needs urgently a heart operation, but the hospital has refused to treat him since he cannot pay.

We have been supporting Mr. V.'s family on a weekly basis. The Ministry of Interior refused to grant him citizenship. The case is in the Supreme court. We hope for others to get involved along with us here at Global Aliyah.
Mr. V.’s Tragedy