The Broken Hopes of N.K.:

The sad course of events for this young woman was one of a kind, and in turn triggered the founding of Global Aliyah. The following is N.K.'s letter.

“I am 24 years old, made Aliyah 4 years ago from Lugansk, Ukraine, through MASA program. I worked in the Jewish Agency as a youth leader since I was 16. I volunteered in the IDF as a part of Sar-El program. As the security situation worsened in Lugansk, my mom Y. and my sister S. (10 years old) made a decision to make Aliyah. My mom went to the Jewish Agency on June 3 as the city was bombed by the warplanes. Jewish Agency representative told her that they would start organizing her aliyah process starting from June the 30th."

"This was shocking news in the light of the worsening war situation in Lugansk, as it was now under constant Grad fire - Aliyah was possible only at the end of June... I couldn't take this anymore - I took a loan from the bank and bought plane tickets for my mom and sister. The only way to fly out of Lugansk was through Moscow as flights through Kiev were canceled already then. My mom packed the most necessary things for herself and for my sister (mostly summer clothes) and left everything - her home, restaurant that she owned and that was destroyed by the bombing - and they fled for their lives from Lugansk. The restaurant was closed already in May because of the worsened economic situation and my mom was left with debts. After all this, my mom arrives in Israel, with a heavy heart (her father was left in Lugansk as men are not allowed to leave the city), but with great hopes. On June 11 we arrived at the Ministry of Interior in Ramat Gan." 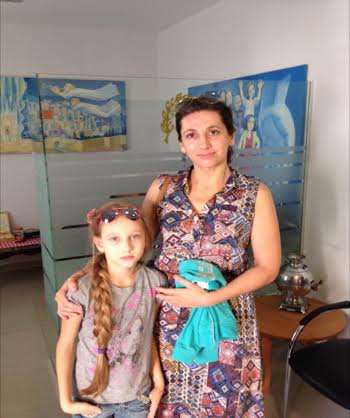 "We were first ignored, then treated with contempt and were told to fill the applications. Within a week, they told us, they'll contact us again. We didn't get any calls from them. I went back to the Ministry of Interior on June 17th in order to explain them our situation, but no one was willing to talk to us and then I was kicked out of the room. I burst into tears as I was shocked by this insensitivity. One of the officials told me to 'shut up' and after a while, one person gave us an envelope in order to send the documents to NATIV. Then I was given a queue to the Ministry of Interior on August the 30th. I filled all the application forms and sent them to NATIV immediately. We were called for a check up by NATIV (the consular department that checks the documents) on June the 30th. In NATIV we passed all the tests and we received all permits. Long story short - they waited for their Aliyah for 3 months, because they didn't have apostille (a special authentication stamp) on the birth certificate of the younger sister. They were told to go back to Ukraine to get the apostilles, but they ran out of money and couldn't return to Ukraine to get these apostilles. Sadly enough, my mother couldn't take it anymore and left Israel in order to stay with her relatives in Belarus.”

The Broken Hopes of N.K.