Many of the stories about Ukrainian Jews seem unbelievable to those that enjoy the freedom and liberty of Western democracy.

Mrs. M.'s story is one of them….
Mrs. M.’s daughter was diagnosed with leukemia. They knew they would find superior medical treatment in Israel. As a result, they came to Israel and spent everything they had fighting their daughter's leukemia. The experience in Israel motivated Mrs. M.'s family to start searching their background. The result of their search was discovering their Jewish roots. 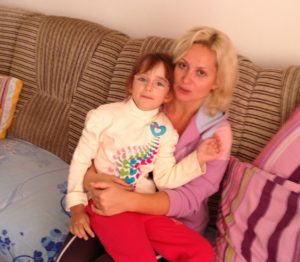 Mrs. M with her daughter

Her quest for proof

When their tourist status ran out, the Ministry of Interior ordered them to leave the country. Friends intervened on their behalf two days before they were going to be deported. In discovering that her mother was Jewish, Mrs. M. started a quest to find the documents proving her Jewishness. She visited the archive in Donetsk in 2012 but was told that unless she paid a $5,000 bribe they would not help. When she said that she does not have that kind of money, she was told: “Get lost Zhidovka and don’t come back again!”

Mrs. M. consequently discovered a relative that had documents proving her Jewishness, but he turned out to be an Anti-Semite. He told her that because it became common knowledge that M. spent time in Israel and was searching for documents to apply for Israeli citizenship, she brought great shame to the extended family. He turned her away and said he never wanted to speak with her again.

Mrs. M.'s parents are hiding in a soil cave shelter near their home because Ukrainian separatists have placed artillery in the vicinity of their home in Volnovakha. They are in constant danger as their home is within firing range. Mrs. M.'s mother wants to come to Israel but her doctor told her that her heart was too weak for traveling. 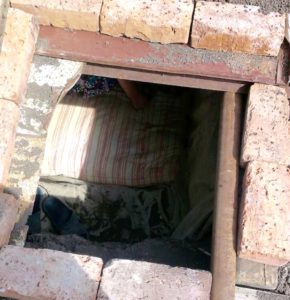 Soil cave shelter
The separatists are spying on people and receive information from “cooperative” neighbors. One particular day, armed men saw Mrs. M.'s parents and asked: “Why is your daughter’s family in Israel? Are you Jewish?” Mrs. M.'s mother showed her passport which states ‘Ukrainian’. The soldiers continued questioning her: “Then why are your neighbors saying that you are Jewish?”
Realizing that she has no future in the Ukraine, Mrs. M.'s sister, Sveta also arrived in Israel on a tourist visa. Global Alyiah is helping them in their search for the documents that will enable them to stay permanently in Israel. We have been also supporting Mr. M.’s family financially.
A Family’s Fight for Finding Documents