Mr. S.S. loved what he saw in Israel during their first visit to Israel 2 years ago.

He immediately felt at home here. For some reason, this visit stirred in him a desire to find out his Jewish connections. He knew his wife Mrs. L.'s parents were Jewish, but they didn’t have any documents to prove it. The only thing he had was the photo of Mr. Y., (his wife’s grandpa) and a photo of his tombstone. No, he wasn’t motivated by fear, there was no looming threat of war in Ukraine then. Through a friend, he contacted the former deputy Speaker of the Knesset Lia Shemtov. Would she be able to help her?

Not only had she been working with the Aliyah for three decades – she knew the system, the people and the process inside out. The problem with many Jewish families in the former Soviet Union  (FSU) is that during the II World War they destroyed the documents, which pointed to any possible connection to their Jewish ancestry. The reason was simple – at that time it was the matter of life and death. Being Jewish during the war meant that you’d be sent to a death camp or that you were shot on the spot. 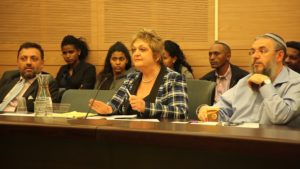 This was also the case of Mr. S.S.'s in-laws: they had destroyed all documents that would state they were Jewish. How to help them? Lia had an idea – ‘Where was Mr. S.S.'s mother in-law during the II World War’, she asked? Many Jews were evacuated as the Nazi army was advancing and as the Einsatzgruppe was murdering those Jews who were left behind. She was evacuated, they knew that… but how to prove it?

Through Lia’s contact network Red Cross was contacted and the document proving her evacuation was found. Then, as more documents surfaced, it was proven Mr. Y. was Jewish. All these efforts bore fruit and as a result, the whole family made Aliyah. Mr. S.S. has still some hassle to solve: because he hadn’t officially registered his marriage with Mrs. L. and did so only after Lia told him to do, his marriage was not accepted by the Interior Ministry of Israel and he received only the residency right, but not yet citizenship… We need help to support this family.