A letter of despair

This is a letter from the relatives of V.T. Their letter in English is exactly as written, without spelling, sentence structure or punctuation corrections
“Two weeks ago we succeeded to contact our relative who lives in Yasinovataya in the region of Donetsk. His late mother is the sister of my mother and his late father was also Jewish. V.T., my cousin asked us to send him money to get him out of the horrible war that is going on in Donbass. We gathered as much money as we could. He escaped hungry and without anything with the last train from Yasinovataya to Harkov and from there he flew to Israel." 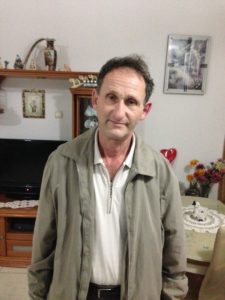 V.'s status as a war refugee

"His 66-year-old sister T. lives in Netanyah. She and her husband are both handicapped. Obviously, their life is not easy but anyway they received V. in their home. Last week V. went to the Ministry of Interior and presented himself as a war refugee. Their answer was that they would not grant him entry with that status, only if he is Jewish he should bring his papers and a proof that he has no criminal record, that he is divorced etc. You do not know what’s going on in Donbass – everything is bombed, local authorities do not work – he cannot go back there to find his documents. All his relatives and I can confirm that 55-year-old V. is a quiet and modest Jew."

Without any rights or benefits

"We do not know what to do. He does not have any medical insurance, money etc. We do not ask any benefits. It’s an exceptional situation; he is a Jewish refugee and should be treated accordingly. Isn’t our country established for this purpose – to receive the Jewish refugees from all over the world?”
(Because of the war, many Jews would have to risk their lives or the lives of others to get documents that prove they are Jews and would entitle them to Israeli citizenship. In many cases, the documentation has been destroyed by the ongoing war between the Ukraine and Russia)
Global Aliyah gave V.T. financial aid and paid for the apostils of his documents. V.T. has received his Israeli citizenship.
V.T. Fleeing From War Zone