Chairman Isaac Herzog thinks up to 100,000 people will make Israel their home, either for their first or second time.

Jewish Agency chairman Isaac Herzog expects that up to 100,000 people may leave their home countries for Israel, or make aliyah (literally “ascent”), once the current global health emergency is under control, Makor Rishon reported on Sunday
Herzog called for the government and aliyah-oriented groups to prepare for “a major wave of immigration to Israel when the corona crisis ends, as happened in the past after many crises in Jewish communities around the world since the establishment of the state. ”In many places, Jews have been especially hard-hit by the deadly COVID-19 virus, with infections and deaths far out of proportion to their percentage in the population.

In Great Britain, 335 Jews have accounted for 1.6 percent of the deaths so far, while consisting of only 0.37 percent of the population. In France, an article in Haaretz stated two weeks ago that “coronavirus-related deaths are reportedly four times the proportion for the overall population.”

In the United States, there seems to be no official breakdown by religious affiliation, but anecdotal evidence suggests many hundreds of deaths at least, as Jewish burial societies report being overwhelmed.

JTA reported in early April that New York City’s Department of Health released figures showing that heavily Jewish areas have especially high rates of infection. While the average positive test rate in the city was 53 percent, in Boro Park, for example, over 67 percent of tests came back positive. Aliyah inquiries

The Agency’s hopes are based on the number of inquiries they have received recently regarding the possibility of immigrating. The first group consists of 60,000 citizens who left the country years ago and have expressed an interest in returning as soon as possible.

The rest are people who have asked about making Israel their home for the first time, with the expectation that the 2020 figure would beat the decade-high number of 35,000 who immigrated in 2019.

Last month in the UK, for example, 500 people inquired about aliyah when the annual number of British immigrants is usually around 700. And in France, said Makor Rishon, some 1,000 families are currently preparing to come to Israel. 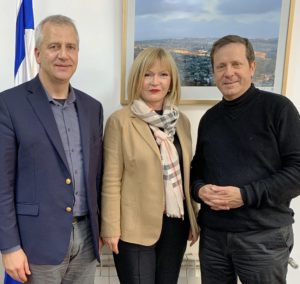 Israel’s well-publicized relative success in battling the pandemic is one reason for the high-level interest, said Herzog.

“In parallel to the global crisis, they look at the way Israel is functioning in the fight against the virus and see a strong country that is functioning well, comparatively, and I am receiving many reactions about it from all over the world,” he said.

Over a hundred new immigrants have actually landed in Israel in the past several weeks, in the midst of the health crisis, as a special exception to the general lockdown on travel. This number included 72 Ethiopians who have been waiting for years for permission to reunite with family in the Jewish state, but also 44 Americans ranging in age from infants to retirees.